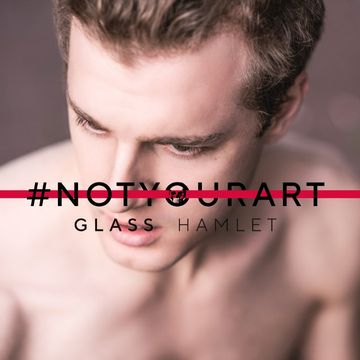 An artist may see themselves as always starting from the same palette, the same frame, and may feel as if they are recreating what they did years ago, or days ago, because they muddled painstakingly through the creative process due to exhaustion.  But when they step back, and let go, it is then they see that they HAVE evolved and reshaped their craft and that same frame just allowed them to keep their signature stamp on that new product.  I can see it here with Glass Hamlet’s “#NotYourArt.”  He has evolved; he is showing us a different feature – another side of himself, but the artist, the Hip-Hop artist we have grown to know and love, that sound, that style, is still present!

That’s the thing that always draws me back to Glass Hamlet’s work - the intellectual way he creates – always thinking out of the box; this guy is truly an artist of Hip-Hop.

We read the “Preface;” this is Chapter One.

The lyrical genius is back with a more autobiographical approach to his music – a more internal view of the artist – his core, his purpose, his domain, his identity.

This is a review of Glass Hamlet’s most recent EP entitled “#NotYourArt.”  Hamlet features six tracks on this cut:

The opening track “Life of the Artist” could easily be described in 4 words:  this song is smokin!  The first thing that draws the listener into this cut is the movie-score-ready music – that introduction?  Give me a minute…. The muffled percussions, back beat, and kick – then the artist is introduced – Hamlet continuing on with his calling card of Floetry.  Surgical spits and attitude hypnotizes you and then the subtle flair of a Byronic Hero.  On the track, Hamlet spits “it’s not creativity it’s a disease/same palette, same season/I’m still painting/just expecting a different result.”  Here is the dreaded battle of the artist – drawing from the same foundation, often using the same terms that we feel comfortable with, alone, working, trying to focus on the future and not the past.  But that’s who we artists are – it's engrained in us – that flair to create no matter the circumstance.  It’s often called a gift and a curse as it pulls you in so many different ways.  The ups and the downs, the good and the bad, the pain and the pleasure.  As Hamlet states, “but I feel alive/so no more whys/cuz to stay alive/half the game is blind drive.”  This could easily be the manual for any artist to read and survive the game of identity establishment and the process of creating in the world of music because this is exactly what a music creator, or artist, goes through mentally, physically, and creatively.  The questions; the curiosity of your craft from those who do not know, and pretty much, those who REFUSE to find out who YOU truly are.   This theme was slightly touched on in the skit entitled “From a Disputation” on Glass Hamlet’s “Author’s Preface” EP.  Take a listen to that track.  In short, a true artist DOES carry an internal burden to create and continue to struggle with the fear of acceptance – to evolve.  Not that the opinions of others reshape the artist’s image of themselves in any way, but the work, or the art, coming from a personal place within and being judged from the external may reshape the message, or concept, of the art itself, and that in itself weighs on the brain.  An artist longs for their message to be understood not so much accepted, and judgement blurs the facts.  This takes me to the second track entitled “A Little Blurred.”

With “A Little Blurred” Hamlet stays true to his nature of transitioning between subgenres within the genre of Hip Hop as he takes a more Trap Music approach to this track with the triple hi-hats, layered synths, and strong kick drums.  In addition, he doubles his voice layering it with a true baritone and tenor effect which laces the track with a duplicity result.  This in turn compliments the theme of the track showing how blending in within society, as a newcomer, can be blurry when you fit in but are yet to know who you are truly.  The struggle was real with Glass Hamlet when first coming to NYC as he raps, in the “pre 2000” decade.  He continues, “long haired migrant I became an urban Mowgli.”  Identifying with your surrounding is easy, but gaining your own identity is hard.

“Dialectics” is the third track and easily the most laid back of the six as the intro music is sultry and intense as well as the music throughout the track balancing the selection with jewelry box keys, stifled bass lines, as well as the echoed vocal adlibs.  But while the music is soft, the message is powerful illustrating how Hamlet grew up in a society where the leaders, or those he calls “tastemakers” held no message – just a cosmetic society full of people pretending, judging, and talking about nonsense.  And as a youngster he created the habit of looking beyond himself never grasping who he truly was, he raps “point[ing] the spyglass outward, never look[ing] within.”  Children within society are reared with these conflicting habits every day, and often, they do not ever gain their true identity.  But Hamlet was able to overcome the struggle, the tension, and step into the world “where they’ll break open your chest cavity/searching for what’s inside” and make his mark.  Moreover, he puts to shame those who talk the way they tweet with empty words criticizing those who do have knowledge.  This track is a great example of Glass Hamlet’s music methodology to which he entitles “Intellectual Hip-Hop” – in short, his raps, his message, is executed to entertain and educate – thus, in this cut he’s lyrically instructing society to wake up and use their senses because they are influencing children with messages that contain no message at all, just “clichés.”

“Not Your Space” garners an eclectic vibe with infused synths, driving percussions, and an organ – not to mention that double layered vocal adlib which just intensifies the main theme that is constant within this EP, that artistic duality at battle.  It is as if Glass Hamlet is saying ‘I am the owner of this domain; you’re just renting.’  And when he poetically says, dryly, “Yeah that’s great” it is so blasé faire.  I additionally love the attitude on this track with the upped vocal effect showing an air of establishment.  This is the “mirror, mirror, on the wall” who’s the one repping and conquering this turf” cut.  The ego on this track is real, but it is not an ego as some may consider EGO filled with arrogance coming from a conceited airhead, no, far from it – Glass Hamlet is justifiably making his mark, representing himself as he came from the grassroots in Hip-Hop, fighting his way to recognition, and now just taking his place.  In seeing that an artist rarely receives a “pat on the back” for their “craft,” one must MAKE you recognize the talent.  It is as if Hamlet has written lyrical graffiti on the wall that reads: ‘Naw, this is not your space son - recognize!”    The “I” effect is crucial and personified with alliteration from the terms “blinding,” “giant,” and “fired” as well as the line “I thought I’d walk in and connect with like-minded hooligans but think again, I’m at the podium.”  Sweet!

The fifth track on the EP is entitled “Run” and drives a heavy R&B tone musically and in the way that Hamlet chose to spit his rhymes – more melodic as if in verse of song.  When you rap along with Glass Hamlet on this track, the rhymes will fall off your tongue and lips like rain drops as there is so much melody on this cut.  In addition, it was clever to choose a second tenor/baritone on his spits.  “Run” clearly suggests that Glass Hamlet is driven to achieve what some may consider unachievable.  And in keeping with his style of intellectual Hip-Hop, the last line of this track is flawless – he aptly says “pick up a [expletive] thesaurus.”  This is Floetry2.

“Conversation with Hamlet” is the final track.  This track permits that creative duality that is ever-present on the EP to come full circle, because in closing the EP, the alter-ego is finally revealed.  Set to a backdrop of cosmic otherworldly music with a deconstructed chord progression, within this track we see the internal creator in conversation with the external artist – the other Hamlet.  Choosing to rap in two different tones was a clever technique Hamlet used to further illustrate the duel existence of an artist.  Always in a struggle with one another, that duplexity and complexity of the artist is illustrated when Hamlet poetically spits “Just know that I’m you/I’m the fugue/I’m [the] tune that you sing [when] you’re sober/that you sing when you’re you.”  It is these two opposites at battle that makes the best single creations.  Here we see the introvert, the protagonist, who humbly prepares the work and the psychotic commanding extrovert, antagonist, who executes its completion.   And when the piece of art is finished, we have chef d'oeuvre (a masterpiece) – which sums up this EP.

In summary, “#NotYourArt” displays clearly how one’s creation is totally theirs and theirs alone – it really is NOT the other person’s art as it is created, nurtured, sculpted, and then released (when ready) by the artist themselves.  It is a work of passion and a work of pain.  And while the audience is allowed to share the art, allowed to like or dislike the art, and allowed to come into the artist’s world by way of the art, the artist is the only person who can change, alter, or redesign their art.  Glass Hamlet’s rhymes and message contained within these six tracks proves the journey taken to complete THAT art – establishing your identity, the struggle to make your mark within society, the misinterpretation of the work itself from the external, and then the ultimate constant battle of the egos – the battle of the identity and the identifier who amazingly creates masterpiece after masterpiece.

This is a very pleasing and creative piece of work by Glass Hamlet.  It truly is the next chapter of his Intellectual Hip-Hop.

A student and a teacher, Glass Hamlet has rose above the norm once again proving himself an artist who is still dominating boundaries within the genre, still transitioning from the stagnate norms of society – he’s made his place from the underground to the street level as the Renaissance Man of Hip-Hop.

Go to https://fanlink.to/vZn to stream or purchase #NotYourArt and go to www.glasshamlet.com to view his social media platforms to stay connected to the artist.