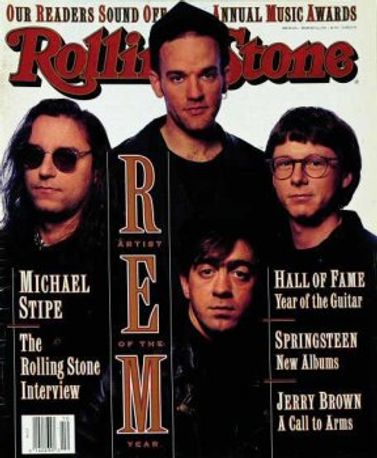 Ah, how I love the Punk era in music and then the Alternative stamp that read “anyone can do this!” – That “No Rules Music” that we SO love!

I was raised in the 1980s, and along with the Bermuda shorts, sugar-laden candy, "Wacky Fruit" gum, "Huffy" bikes, skating rinks, and water parks in the USA, there was those rocking bands in those two decades that just made the summers in the 1980s and 1990s so memorable.  And since it is the beginning of summer, I crank up my 80s and 90s tunes in my office every day in seeing that that is what me and my sister Tonya would do every summer - it's  like a  tradition.

Well this week in my office, it was REM's turn at the helm.  While listening, I thought, “they were truly trailblazers of their time.”  So, here I am listening to song after song, and I decide to share this with you guys.

Back in those decades, the listening audience wanted music that broke all of the rules like Rock music did decades earlier, but this time, the music also had to change up the sound, vocalist’s appeal, and reshape those rules.  We asked, and R.E.M. answered with a radical alternative choice to mainstream pop.

Regarding following your own pattern and making it work (what I call “No Rules” Music) Michael Stipe (lead vocalist of R.E.M.) said it well when he stated in Rolling Stone Magazine “The gold records go to charity auctions or to my grandmother. I don't need that to tell me what I have achieved. I feel pretty good looking at the record cover and thinking, 'That has that great song on it, and I can still listen to it.' That's achievement.'”

For those of you who do not know, R.E.M. is an American rock band from Athens, Georgia formed in 1980 by drummer Bill Berry, lead guitarist Peter Buck, bassist/backing vocalist Mike Mills, and Michael Stipe. As one of the first alternative rock bands, R.E.M. has “No Rules Music” down to a science with what Wikipedia says is noted for Buck's ringing, arpeggiated guitar style, Stipe's particular vocal quality and obscure lyrics, and Mills' melodic basslines and backing vocals.

Though the band started in 1980 and had hits like “Radio Free Europe” and “Talk about the Passion,” they did not breakthrough until the album “Document” with hits like “The One I Love” and “It’s The End of the World as We Know It (and I feel fine).”  And we all love “Losing My Religion” which became a classic Alternative track with a cult following because of Stipe’s unique vocals.

When Christopher Bollen from Interview Magazine asked Michael Stipe “You didn't have any formal training as a singer … did you?” Stipe replied leisurely “no. It didn't even occur to me. The punk-rock ethos was ‘Do it yourself. Anyone can do this. We're not sent from the heavens.’ At the time … rock stars seemed like these other creatures to me. But the whole point of the punk-rock thing was that ‘We're not special. We just have a voice.’ You don't need to be talented.… So I, in a very naïve and teenage way, said, "That's it. I'm going to be in a band."

Of course, this is when music gave all of your senses a chance to compete – the vinyl albums, 45s, and cassettes were touched with your fingers, the linear notes were read with your eyes, and the concerts – OMG! – The concerts were lit!  All ears were ringing.  And that is the only place you could see these legends rock out.  They were a mystery and we loved it.

R.E.M. really had a big impact on my band’s career as they displayed the much needed shift in the music industry in the 1980s/1990s – they showed up-and-coming bands, vocalists, and writers alike that you can draw outside of the lines so-to-speak when it comes to your music.  And they were right.  Know why?  Because not everyone who is creative is another Aretha Franklin belting out octaves or scales; not many are going to be Jimmy Hendriks; and, many of us prefer the road less traveled.

So in stepping up to the plate in originality, R.E.M. showed us that we can be US and that is alright – there is an audience for you.

And when asked “wouldn’t you like to have people understand what you're singing?” Stipe simply stated “No. I don't see any reason for it. I think music is way beyond rational thinking. It doesn't have to make any sense. ‘Half a World Away’ [on Out of Time] doesn't make sense to anybody but me. And even to me, it's a totally fabricated experience; it's drawn from things that I know or saw on TV or that people I know told me. It's a complete fabrication. But there's something there.”

True R.E.M. gave respect to those who came before them, which is something any artist should do, but they also forged their own niche in the way they wrote their songs, sang those songs, and how they dressed while performing.

For them it was NOT about the IMAGE so much as it was more important for that message in that song to yell out at you.  And it had nothing to do with how many followers (fans) they had raked up, as everything was done for the MUSIC.

That’s what’s missing in music today!  That originality and fairness, that RIGHT to be YOU, which came along with Punk and Alternative music.  A time in music where one person who created something says “hey, look at what I just did,” and others say “cool dude – rock on – let me help!”

Today, that freedom in creativity has changed a lot.  Today, those who follow the rules set by this industry (I am speaking of many Top 40 artists) are painted to be PERFECT and sadly that is what many youths are growing up to accept – PERFECTION – but when they see that none of us are perfect, sadly, that is when they give up.

The underground artists, the Indies, the self-produced musicians, the music creators, the music writers, etc., we all show youths there is another way to view talent and that is by the creation of the artist, not the artist themselves.  Let the work speak for itself.

Honestly if more people thought like this, rather than hold up so much to perfection, there would be less people feeling worthless.  Like Stipe said “I never really believed that to understand or appreciate a good book you have to know who the author is.”

So if you have a craft and you have honed in on it, or you are treading those waters now, don’t give up – if we can do it, if R.E.M. can do it, then you can do it.

Do you have any R.E.M. favorites?  If so, let me know. Go to my Browsing Music box on this site to listen to "Losing My Religion" by R.E.M.  For more on this iconic band, go to:  www.remhq.com 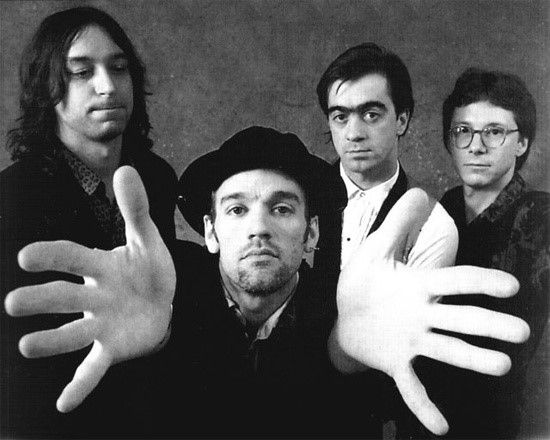